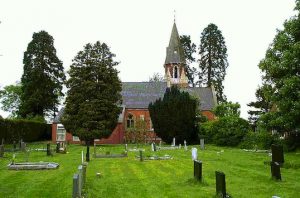 St Andrew’s Church from the churchyard

THE PARISH
The origin of the name Eastern Green is unknown, but possibly the first community formed in a clearing or green amid the wooded countryside. St Andrew’s parish as far as we can gather assumed an identity of its own with the erection of St Andrew’s Church, which was consecrated on November 4th 1875. Earlier the parish was encompassed by Allesley which has often been said to be a parish which had only one recognised place of worship. Some delving into the past reveals that a house  at the corner of Unicorn Lane and Dial House Lane, once occupied by John Harris, was granted a licence for use as a place of worship in 1824 by the Bishop of Lichfield and Coventry. St Andrew’s parish today also has The Lutheran Church besides the familiar parish Church.

The area about Eastern Green had an interesting network of roads, the majority of which have disappeared as roads many though having been preserved as public footpaths. One of these was mentioned by John Ogilby in his road map of 1675, this being Sherles or Sherley’s Lane from Pickford Grange Farm to Back Lane and it is interesting to note that the name has been preserved at the Berkswell end. Unicorn Lane led to one of the entrances of Allesley Park, the boundary of which was roughly along the present Alderminster Road. Pickford Green Lane is also an old thoroughfare once called Workhouse Lane from the fact that Blythe House was used as the Allesley Parish Workhouse from 1790 to 1820. 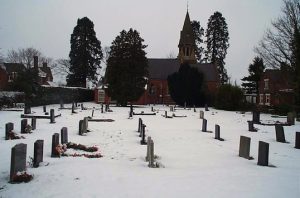 An interesting house stands at the corner of Pickford Green Lane and Eastern green Lane and once belonged to Major Rabon (Rawbone) of Cromwell’s Army in 1660. In 1669 it was reported to the Bishop that Presbyterian conventicles were being held in this house.

Pond Farm House was probably once within the moat at the rear of the old farm house and occupied land that was recorded as once being the property of The Priory of Stoneley and called Estendmoore. Julines Herring once occupied the farm vacated in 1975 by Mr. T Knowles. Julines Herring was a parson turned Presbyterian who caused Archbishop Laud to threaten “I’ll pickle that Herring”.

Eastern Green’s proximity to Coventry did not mean that this city was easily reached and relative isolation served to define the community which could boast of its own butchers shop, tinsmith, several laundries, a blacksmith and a wheelwright. We are told that it always had two pubs, “The Old Unicorn” and one which rejoiced in having the name of “The Rag and Louse”.

During the decade in which St Andrew’s was built the parish had a mere 56 houses in contrast to today’s figure of over 2,500. 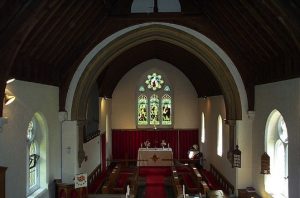 Inside view of St Andrew’s Church from the upper room

THE CHURCH
The building of the Church was financed by money left by Mrs. Elizabeth Morgan whilst the site was given by the late Archdeacon Bree D.D.

The initial incumbent was the Reverend J.L.Sutton, formerly curate of Allesley. Mr. Sutton resigned in 1913 and was replaced  by the Reverend H. Temple Robson, who died tragically at Tile Hill Station in November 1914. During the years of World War 1 the former headmaster of Henry VIII Grammar School was Vicar. He was in turn followed by the Reverend W.A.W. Despard until 1937. 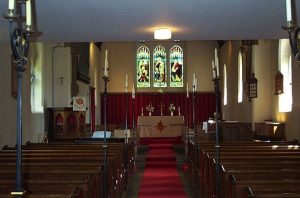 Inside St Andrew’s Church view to the altar

Many will remember after reading the above history that many of the names of people who have served our Church so well have been perpetuated in the names of the roads of this Parish.

The Church for 99 years remained exactly as built at its consecration – it served a community housed in 56 homes.

The architecture is typically Victorian and the Church is indeed a good example of that type. Among the features of that period are the lines of blue bricks which are repeated in both the former vicarage and the original school building.

The Church was  extended in 1975 with an upper room added to accommodate a growing congregation and a side room at the back for meetings.

Development over the past 25 years has altered the face of Eastern Green with new housing estates built which have added a growing population with over 3200 homes now being served by the Parish.